He received a degree in Architecture in Buenos Aires in 1994 and then left for Italy to follow one of his great passions, painting.
He came to Florence, where he studied art for a year at the school “Charles Cecil Studio”. In the meantime, he became acquainted with artists and goldsmiths and attended their workshops. He became very interested in the perfection of the techniques they use. And so began a new journey that led him to learn the techniques of precision casting, lost wax and enamelling in the vocational training courses offered by the Tuscan Region. Here he also learned stone-setting techniques from the master Carlo Pestellini. After this experience, which ended in 1998, he began collaborating regularly with goldsmith workshops, creating wax, plasticine and play-dough models. He also worked with a number of Florentine schools as a teacher of wax-modelling and enamelling. Since 2001, he has worked on a continuous basis at the Metallo Nobile school as coordinator of all courses and as jewellery making, enamelling and wax-modelling master.
He is also involved in projects for the transfer of know-how and innovation, carried out in cooperation with the “Azza Fahamy Jewellery” Company and the Technological Institute of Metals and Jewellery. These projects are financed by the Egyptian Industry Ministry.
On behalf of the Metallo Nobile school, in 2009 he also taught the course “Goldsmithing techniques: design and engraving; execution of artifacts with Florentine-style fretwork”. This course was inserted into the experimental catalogue of the teaching curriculum of the Province of Florence and financed by the Tuscan Region.
He spends much of his free time indulging his love for painting. He tangos with passion and also teaches this fiery dance. 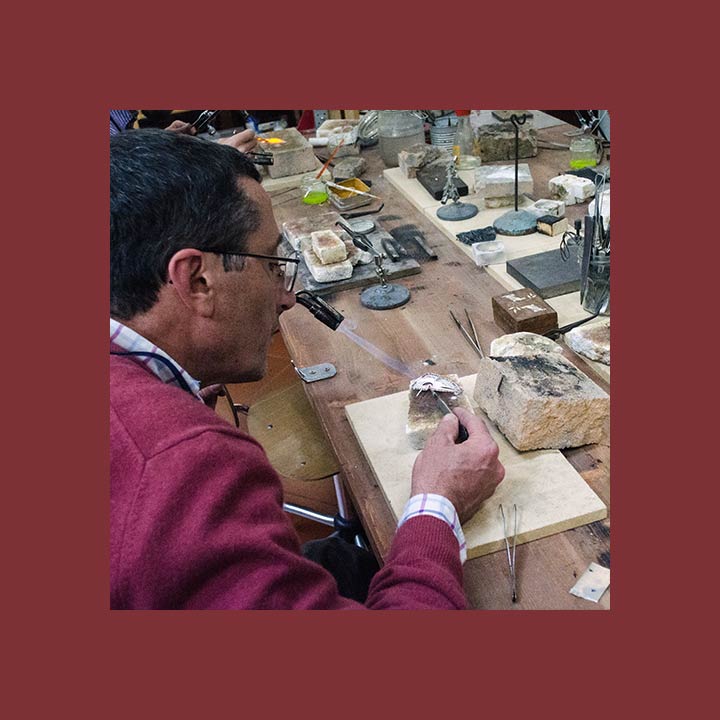