Riccardo did not receive any formal training in jewellery making. However, his passion for jewellery making and its various techniques was born very early on. As was usual in Florence in the 1960s, the only way to learn artistic techniques was to become a “workshop boy”, an apprentice at one of the large Florentine companies; in other words, to follow and learn from a great master.
Riccardo followed this path that led him to work for renowned Florentine companies such as “Franco Ricci” and “Teghini Valsodo Argenterie” (a silversmithery) where he became workshop foreman.
In 1960, he started his own goldsmith, engraving and stone setting workshop. Parallel to his own activity, he also began to collaborate with the “Buccellati Watches SA” Company. This involved monthly trips to the company’s Swiss headquarters to hold training courses and consultancies.
After 2008, following various collaborative efforts with other schools, he began to work as senior teacher at the Metallo Nobile jewellery school and also to become involved in projects for the transfer of know-how and innovation, carried out in cooperation with the “Azza Fahamy Jewellery” Company and the Technological Institute of Metals and Jewellery. These projects are financed by the Egyptian Industry Ministry.
On behalf of the Metallo Nobile school, in 2009 he also taught the course “Jewellery making techniques: design and engraving; execution of artifacts with Florentine style fretwork”. This course was inserted into the experimental catalogue of the teaching curriculum of the Province of Florence and financed by the Tuscan Region.
Riccardo loves music, travel and painting. 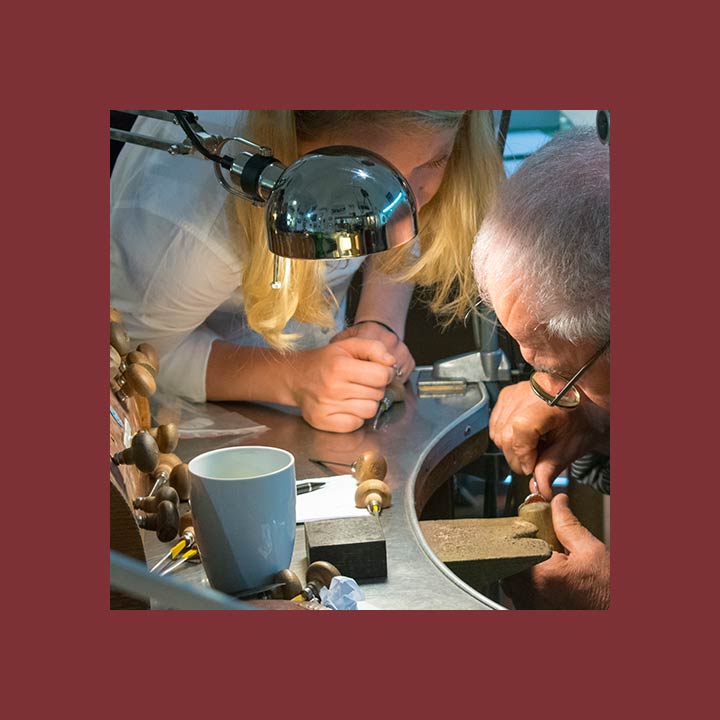